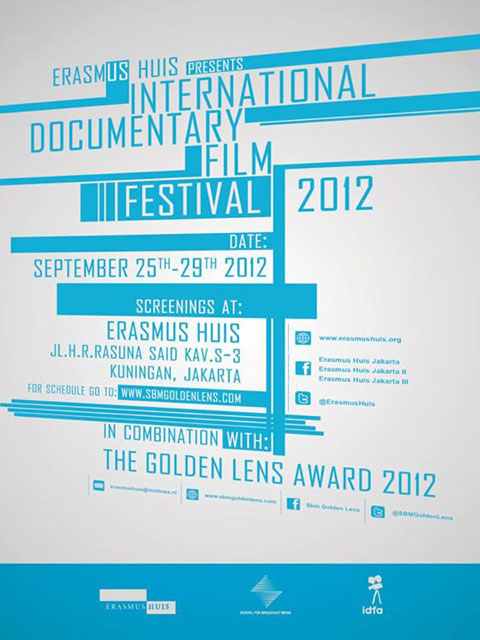 Recently documentary film production, festivals and the interest in documentary making in Indonesia has increased.

Amongst the festivals is the SBM Golden Lens, where documentary film lovers can enjoy 20 selected Indonesian documentaries from the competition as well as many of best documentary films from across the world – provided by the IDFF at Erasmus Huis, Jakarta.
Besides all the crew from the School for Broadcast Media and Erasmus Huis, Jakarta, the success of the 2nd SBM Golden Lens has been the work of some leaders who has put their hearts and minds in the year long process. They are the Festival Board: Jeroen Gankema - Erasmus Huis and Lalang Wardoyo and Graeme Stephen - SBM.
This year the quality of the work increased dramatically. Much of the work was produced by production houses and professional cinematographers who have won previous festival awards with Festival Film Indonesia (FFI), Festival Film Dokumenter Bali, Festival Film Dokumenter Yogyakarta, Festival Film Dokumenter Bandung and others. Also those that came from vocational high schools whose productions have won Festival Film Pelajar Indonesia. Total incoming videos were 100.

With respect to documentary filmmakers, for me a good documentary conveys a unique story, consists of an important message for people and of course must be interesting and entertaining to watch. Voice over narration or words used in telling the story should not be in any way more important than strong moving image storytelling and editing technicality in the making” First Selection. This was when all the movies selected based on administration completion such as signing the form, and production values. All juries for the first selection were production crew and trainers from School for Broadcast Media (SBM). The result was 20 films from each category, for total of 40.
Final Selection. The 20 films from OPEN Category and 20 from STUDENT Category were then selected to list 10 best for each category by grade. Juries were a combination of 1 chief judge from the first selection plus 4 independent for the final selection. They went all one more time to list the best five for each category.. Values of the final selection were again production values looking more on the sound, lighting and editing. The rank was decided based on the entertainment value of each film. The 10 best of each category were screened throughout the festival (25 – 29th of September). Best audience choice was picked by audience from the 20 screened films.